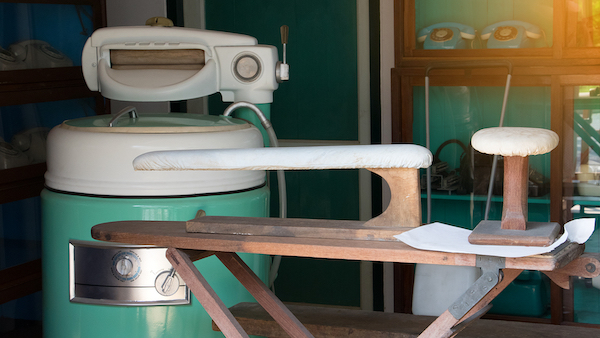 The roots of the modern-day laundromat actually began in the Roman Empire, when washers would collect clothes from households, clean them and then return them to their owners.

The Birth of the Laundromat as We Know it

The first “washing machine” was invented in 1851. About a decade later, a “wringer” clothes dryer was created. In the early 1900s, electric washers and dryers were invented, but they were very expensive to own. For this reason, laundromats began to spring up all throughout the world as an affordable means for people to do their laundry. In the mid-1900s, coin-operated washers and dryers were created.

Though washers and dryers became more affordable and many homeowners purchased them to do laundry within their homes, the laundromat continued to serve as a community staple throughout the 1900s – and this continues today. Laundromats are commonly frequented by many members of the community as an affordable, practical way to do their laundry – and many people opt for the laundromat over doing laundry at home for the community-like feel as well.

Today, laundromats still serve an important community need and offer area residents a fast, affordable and safe way to do the chore of laundry. And as washing and drying equipment has evolved to more efficient and faster cycles, the laundromat has also evolved. Today’s laundromat is more of a community hub than anything else, where friends can gather weekly to take care of an important task and converse. And today’s laundromat accepts cashless payments, offers free wireless Internet to keep guests connected, and other guest-friendly perks. Some even include special areas where children can hang out while their mom and dad are doing the laundry.

What will the next big laundromat innovation look like? Stay tuned to find out. And until then, why not take some time to appreciate this important community resource.